Posted on August 2, 2010 by endchildhungerblog

Nearly seventeen million children in America go to bed each night facing hunger and food insecurity, not knowing if the new day will bring hope or hopelessness. We can fix this. This country has the food; we have the existing federal programs such as school breakfast, school lunch, after-school snacks, after-school dinners, summer meals, and nutrition education that, if utilized to their maximum potential, can put an end to childhood hunger.

Your tax-deductible donations support the advocacy and programs of End Childhood Hunger.   To donate, use the Donate button, right.

With the holidays now at an end, and the New Year upon us, we thought we’d re-post an article my partner and I wrote this time last year.  Focusing on homelessness in Central Florida, the piece ran in the Tribune’s Orlando Sentinel.  Soon after it was published, we realized that if we replaced the location with any city in our country, the story would be just as applicable.
This article is was what helped launch Social Discussion.  It set my partner and I on a course to “Get Involved, Make a Difference & Change the World.”
Happy 2013!  Let’s get to work.

I’ve always been skittish of those who beg for money on street corners. “Don’t make eye contact … maybe this vagrant will go away,” I’d…

Posted on December 28, 2012 by endchildhungerblog

Another clear example of the benefits of promoting school breakfast: This report is courtesy of the Manteca Bulletin, in California. The full article can be found here.

When Shasta Elementary School in California began serving breakfast in the classroom, first grade teacher Sherry Hatfield thought it would be an added burden to hand out breakfast items to students as she was taking attendance, getting the lunch count, and collecting homework. She found that the program was a “blessing in disguise.” The string cheese, apples, graham crackers and milk, (one morning’s menu), kept the students quiet for 15 minutes, and she was able to take care of morning housekeeping, like taking attendance, with few distractions. “It doesn’t take away from my day,” she said. Shasta School offers universal breakfast – free for all students regardless of household income, and this is the first year for breakfast in the classroom. “So many studies show that students are more receptive to instruction with a good breakfast,” said Principal Audrey Greene. She also said that Nutrition Services provides the classrooms with cleaning supplies – and the students get involved by handling cleanup themselves. The Manteca Unified School District has been offering breakfast in the classroom for three years, and the program is helping breakfast participation to skyrocket.

Posted on December 21, 2012 by endchildhungerblog

Posted on October 16, 2012 by endchildhungerblog

Disturbing in so many ways. Childhood hunger worldwide on “World Food Day” infographic – thanks to save1.com

Posted on April 13, 2012 by endchildhungerblog

Great information from our friends at FRAC, the Food Research and Action Center: USDA researchers, using Current Population Survey data to examine SNAP’s effect on poverty from 2000 to 2009, found that the prevalence of poverty declined an average of 4.4 percent due to SNAP/Food Stamp benefits, with the average decline in the depth and severity of poverty at 10.3 and 13.2 percent, respectively. SNAP/Food Stamps reduced the depth of child poverty by an average of 15.5 percent, and child poverty severity by an average of 21.3 percent.

When SNAP/Food Stamp benefits were increased through the American Recovery and Reinvestment Act in 2009, (overview & link to final text of the bill)  the SNAP/Food Stamp anti-poverty effect peaked. SNAP/Food Stamps served 44.7 million Americans in an average month in 2011. “Our analysis shows that SNAP significantly improves the welfare of low-income households,” note the researchers. Follow this link to the report, titled “Alleviating Poverty in the United States: The Critical Role of SNAP Benefits.”

Posted on February 24, 2012 by endchildhungerblog

Based in part on data from the U.S. Census Bureau’s American Community Survey (ACS), the latest Kids Count Data Snapshot found that 11% of the nation’s children are growing up in areas where at least 30% of residents live below the federal poverty level — about $22,000 per year for a family of four. For more details, a link to the Annie E. Casey  Foundation Press Release is here.

Posted on February 23, 2012 by endchildhungerblog

KANSAS CITY, Mo. — Too often it is after the fact that teachers discover their students are worrying less about math and and reading and more about where the next meal comes from.

The Healthy, Hunger-Free Kids Act, signed into law by President Barack Obama in December 2010, provides federal funds for the after-school dinner program in areas where at least half the students qualify for free or reduced price lunches.

Check out the full story on the impact of after-school “dinner” in the Huffington Post story here.

Long Lines For Free School Meals, Thanks to The Economy

Posted on December 6, 2011 by endchildhungerblog

The number of students receiving free or reduced-price school lunches rose to 21 million last school year, up from 18 million in 2006-07. That number represents a 17 percent increase, according to an analysis by The New York Times of data from the Department of Agriculture, which administers the meals program. Eleven states, including Florida, Nevada, New Jersey and Tennessee, had four-year increases of 25 percent or more. This represents huge shifts in a vast program that has long been characterized by incremental growth.

Students in families with incomes up to 130 percent of the poverty level — or $29,055 for a family of four — are eligible for free school meals. Children in a four-member household with income up to $41,348 qualify for a subsidized lunch priced at 40 cents.

All 50 states have shown increases, according to Agriculture Department data. In Florida, which has 2.6 million public school students, an additional 265,000 students have become eligible for subsidies since 2007, with increases in virtually every district.

Click the “analysis” link above, or here, to read more of the Times story. For general information on the National School Lunch Program, click here.

People Are Starving, But There Is Enough Food To Go Around

Posted on October 30, 2011 by endchildhungerblog

Another amazing infographic, this time provided by the good folks at Fast Company, and reported by Morgan Clendadinel.

One in seven people in the world is malnourished. But the research presented here makes a strong case that the solution isn’t producing more food – We already produce too much. It’s just not going to the right places. The full monty runs about two feet long, so please click on the infographic link above to get to the data. It’s worth a click!

Just What Is “Food Insecurity,” Anyway?

Posted on October 24, 2011 by endchildhungerblog

Major props to the Greater Philadelphia Coalition Against Hunger for tweeting about it, and the amazing folks at Good for producing this “Empty Pantry” infographic that lays out in chilling detail the scary truth about the concept of  “food insecurity.” To get the full- size version, go here or click on the infographic itself. And make sure to check out the entire Good web site via the link, above. 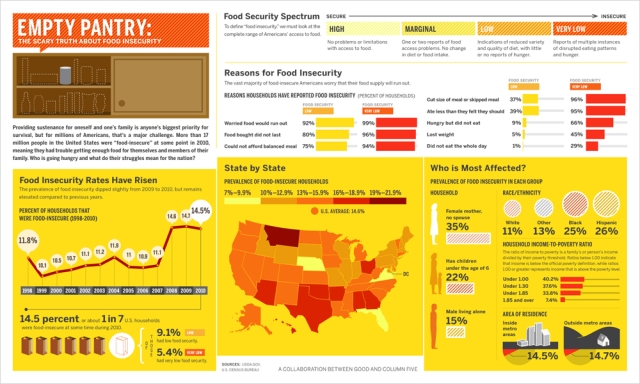